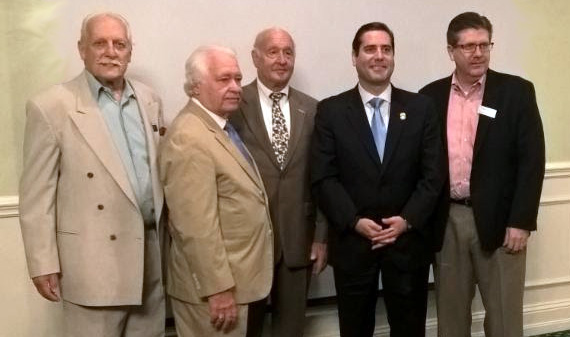 This Friday we changed the format to Q&A. Our speaker this morning was Suffolk Police Commissioner Timothy Sini. Joe Campolo conducted the interview and later in the program the audience also asked questions.

Mr. Sini previously worked as a prosecutor under US Attorney Preet Bharara. He explained that prosecutors are actually part of the investigative team. They determine what evidence is needed to make a case and they have the discretionary ability to evaluate a worthwhile course of investigation. He painted a picture of what a prosecutor does that many of were not aware of.

As a police commissioner he has oversight of programs and procedures.

We discussed the protection of public officials. Joe Campolo expressed concern over the unavoidable exposure to danger that elected officials face. Tim admitted that while most of the time the danger is minimal, it can be challenging protecting them.

A question was asked about crime that is thought to arise out of immigrant populations and the commissioner asked the audience what they thought was happening on that score. The answer was that immigrant populations have a lower incidence of all crimes than the general population. Sini cited several reasons for the low crime rate, and among them were they are often working hard to make a living, they value their status in this country and do not want to squander the opportunity that they have been given. In addition they tend to be more family oriented than others, and they tend to be religious.

The drugs and gangs were discussed at some length. First Mr. Sini gave a history of the gangs and how they grew out of the jails of California. Inmates were sent back to their home country and metastasized into the treacherous gangs that we have now. He admitted that this gang threat is real and big, but the police are always developing strategies to combat the gang threat.

Opioids were not discussed in great length but the commissioner acknowledged the challenge.

Mr. Sini is a knowledgeable police administrator. When you combine his knowledge as a lawyer with his understanding of police work his experience as a prosecutor, I think you get a well-rounded individual for a very complex job. —- Ernie Fazio
Thank you staff members Marguerite, Cheryl, Lauren, Toni-joy,Victoria, and Stephanie. 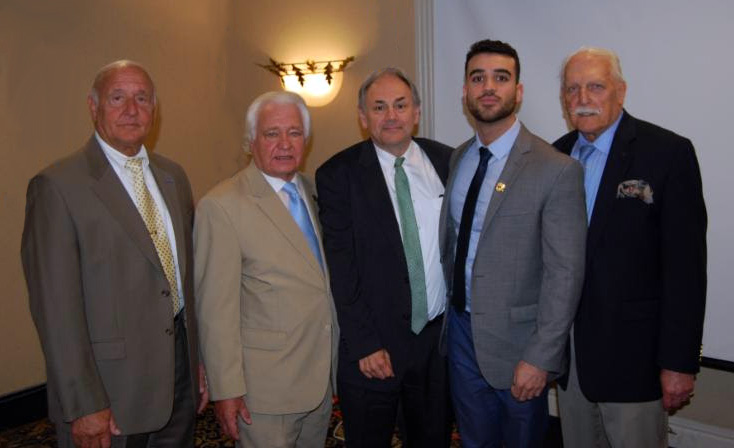 Friday morning we had John Nader PhD, president of Farmingdale State College. Dr Nader took the helm at Farmingdale last July and he is making a mark on the college. Each administration brings something new and John has had the unique position of first being a politician. Prior to Dr. Nader coming to academia he was the mayor of the city of Oneonta New York. He later took on the post of Provost of Dehi College a technical institution in the SUNY system.

As president of Farmingdale he is implementing programs with a point of view that embraces the highly competitive aspects of political life. President Nader told us that the brain drain that many people talk about is less of an issue with Farmingdale students and 80% of the grads remain on Long Island. 74% of them find employment in the field that that studied.

Farmingdale has made alliances with local major manufacturers and suppliers such as Canon and Henry Schein. Nader is actively nurturing that effort. These partners provide intern positions for the students. One of those initiatives is an alliance with National Grid. Grid’s president Ken Daly, has been working president Nader on the training of natural gas workers.

Another proud operation of the college is the aviation program. It is small, about 100 students but with good equipment and under the competent supervision of Col. Mike Canders who has been a speaker at LIMBA himself.

The NEXUS Center of Allied Learning is an outreach program that will be receiving new funding. Farmingdale has been conducting an Energy and Sustainability Conference each year and that has been a success in displaying new techniques in energy methods.

Dr. Nader discussed the Excelsior Program that provides free tuition. The guidelines are income levels and a commitment to remain in the state. If a student decides to leave the state the tuition advance becomes a no-interest loan.