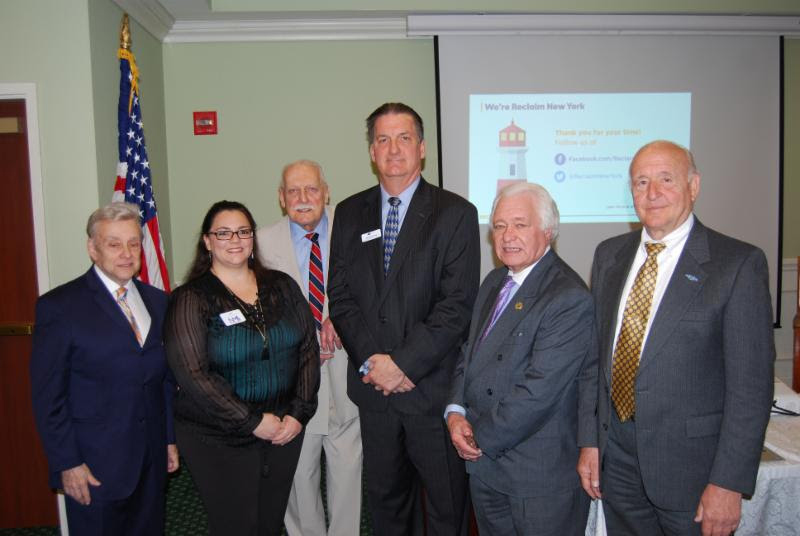 Michael Watt talked about whet Reclaim New York does. He says Reclaim New York is a nonpartisan think tank. It does not lobby elected officials on behalf or against any legislation they might vote on. Rather, the group’s mission is to get local citizens involved in the political process by engaging with local elected officials or school board members and taking action on issues of concern.

Mr. Watt pointed out that New York State has the second-highest cost of living (next to Hawaii) and is one of the worst in the nation when it comes to the tax burden on its residents. The Empire State is second-highest in personal income taxes, fourth-highest in property taxes, ninth in sales taxes and 12 th in excise taxes. Further, New York is second to New Jersey in having the worst business climate.

More than half of a Long Island resident’s tax bill comes from school taxes. Mr. Watt said a majority of the school taxes go to pay for teachers’ and administrators’ salaries and benefits. It may be difficult to have the school board deal with the issue because some of the sitting board members are also schoolteachers or are with the teachers’ union and do not want to vote against the budget, especially when it comes to reducing salaries or partial contributions to health care.

According to Mr. Watt, senior citizens are the most politically active age group. The younger generation, he said, are very smart and have a great work ethic, but are not as involved in the political process. Although they want to stay on Long Island, they fear that they cannot afford live here. In order for a young Long Islander to live here, that person must make between $150,000 and $200,000 a year.

Reclaim New York is challenging local and state governments on the “fees” that are imposed on residents, such as the $500 mortgage recording fee when buying a house and the five-cent- per-bag fee at supermarkets. He said that, unless the fee is being used to cover the cost of municipal services, it is considered a “tax.” Such fees, he said, are illegal.

Another problem with state government is corruption. In the last 10 years, 36 state legislators have resigned or been removed from office as a result of illegal activity, such as bribery or embezzlement. Mr. Watt spoke about the New York Transparency Project, in which places all information on the website to show if a municipality is being fiscally responsible with taxpayer money. This, in turn, makes government workers more efficient in their jobs.

Mr. Watt said the problem with the cost of living is that it is tied to taxes, which is why many people are leaving the state. He said 1.8 million people have moved out of New York since 2000.Despite home sales at record prices and job growth, there is a lack of good-paying jobs in the state that would allow those to afford a home. He said that, sometimes, we are our own worst enemy because we complain about the high cos tof living and high taxes, yet, at the same time, we admit we will pay more for services if it is totally worth it.

New York State was one of five states in the nation that were negatively impacted by the$10,000 state and local tax cap under the Tax Cuts and Jobs Act. But the reason these states were impacted was the high taxes.