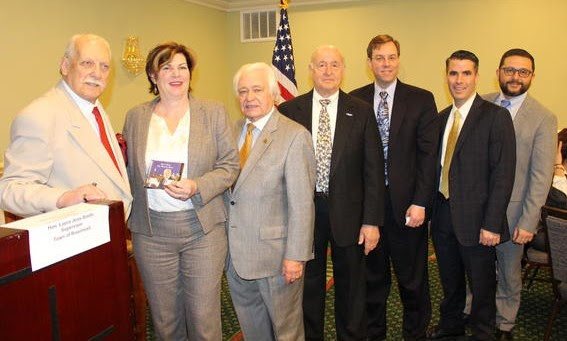 Laura Jens-Smith was suggesting a course of action that the then Supervisor Sean Walter did not agree with. He said “When you are Supervisor you can do it your way” She replied “OK I wll” and ran for the office and won. That’s how it began.

But Laura was not a political neophyte. Supervisor Jens-Smith has sat on numerous community boards including the Board of Education, eventually serving as President until her move to Riverhead Town Hall.

She began her prepared remarks pointing out a number of strong points that the Town can claim as well as the diversity of economic winds that prevail in the area.

After awhile when she touched upon the need for transportation I suggested that using a Maglev on a single guideway would work extremely will to connect Ronkonkoma to Riverhead and could be run constantly. I asked if she would support that effort. She thought it would be a good idea. At 100 MPH the trip would take 15 minutes each way.

Ms. Jens-Smith expressed concern that the rural community in the Town of Riverhead is disappearing as farmland is giving way to newly built houses. She is looking to use Transfer of Development Rights in order to preserve open space.

She is taking an active role in revitalizing the downtown area as local stores compete with shopping malls and their big-box counterparts. She has seen how Patchogue and Greenport turned around blighted areas in their villages into thriving hot spots.

She is also trying to build up the art scene in the downtown area with the help of local developers, the Riverhead Chamber of Commerce, the Riverhead Business Improvement District, and the East End Arts Council. One of the ways to attract more creative types to the area is an affordable housing lottery, with preference given to artists.

She is looking to rezone the downtown area so that newly constructed buildings along Main Street will keep with the character of the town. She is also proposing a “hub and spoke” transportation system in which people can easily access downtown Riverhead from various modes of transportation (LIRR, bike lanes, buses, etc.) She also wants the MTA to expand train service to Riverhead and redevelop the shuttered LIRR station.

EPCAL is still yet to be developed. There has been talk of installing a solar panel farm on the property. Ms. Jens-Smith said, while solar energy is a viable alternative energy source, that should not be the only use for that property. EPCAL would need to be developed into a place for good-paying jobs, not for residential use.

Route 58 has long been known as an avenue through Riverhead for retail space, but the Internet is competing with these brick-and-mortar stores that are struggling to keep open. She proposed “repurposing” the road, in that one-story buildings along the corridor will have an additional story built on top to be used for commercial space.

While she is looking to build up the town, Ms. Jens-Smith said the town should preserve its rural character. The problem is how to save the next generation of farmers and how to making farming profitable enough for the younger generation to stay.