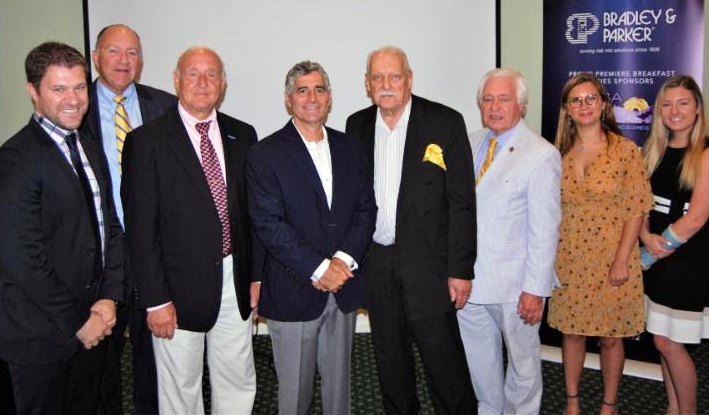 Steve Levy talked about how taxes are affecting Long Islanders and why they are so high. He addressed the 2% tax cap, which, he said, is not a permanent cap. It gets renewed every four years because the elected officials in Albany need to stay in power and will make that campaign promise to renew the cap. The last time the cap was renewed was in 2015.

To get around the tax cap, more school districts are bonding, or borrowing, money to pay for special projects. In the end, he said, school district residents will pay more from bonding, He pointed out that the Port Jefferson School District bonded for $29 million for a project, resulting in a 5% tax increase. Mr. Levy added that most bonds are legitimate, but they need more scrutiny; he proposed that bonding for projects should be voted on the same day as the school budget.

Suffolk County recently bundled a series of bonds for infrastructure projects and put them to a single vote. Mr. Levy said bundling of the bonds takes away the opportunity to debate each bond individually and make a decision on each bond.

School districts, meanwhile, have hoarded excess money in their coffers. Many districts have reserves in excess of the 4% allowed in escrow. This extra money is not given back to the taxpayers, thereby keeping taxes artificially high. A solution is to use the MTA Rule, in which any excess money would be taken back by the comptroller.

This morning, it was announced that the GDP grew by 4.1%. Mr. Levy said that tax cuts generate more revenue, not less. As examples, he cited John F. Kennedy’s tax cuts by 20-30%, resulting in 5% growth over the next eight years, and Ronald Reagan cutting taxes by 40-50% from 1983 to 1989, income for the upper class and the middle class rose by 12%. He also disabused the notion that tax cuts lead to budget deficits; he said the budget deficits are caused by overspending. When the budget deficit grew under the Reagan administration, Mr. Levy said that was the result in spending, especially within the military. Chairman Fazio pointed out that when JFK reduced taxes the highest tax rate was 90% and that was the reason the effect was great.

On the topic of renewable energy, Mr. Levy said he supports alternatives to fossil fuel, but at the same time, he does not believe these goals proposed by Governor Cuomo and other elected officials of 50-100% renewable sources within 10 years is not achievable. He also said offshore wind power would not be economically feasible because it would cost seven times more than what New Yorkers are paying now for energy costs. Mr. Levy added that Long Islanders are currently paying $7 billion to bail out a nuclear power plant in upstate New York; he reminded the audience that, when Shoreham closed down, no one else in the state offered a bailout.

Mr. Levy concluded his presentation with councilmatic districts. He mentioned the lawsuit that was filed by a group of Latino residents and activist groups against the Town of Islip, claiming the town’s at-large voting system does not properly represent the Latino population. Mr. Levy said all of the current town board members live on the southern part of Islip Town, with none of them living in Brentwood or Central Islip, which is predominantly Latino. He said the town residents should vote for a councilmatic district and that, if it is good enough for a Republican-controlled town like Islip, it is good for a Democrat-controlled town like Babylon. Chairman Fazio suggested that councilmatic districts in more homogeneous towns probably work better, and that all remedies may not work everywhere.