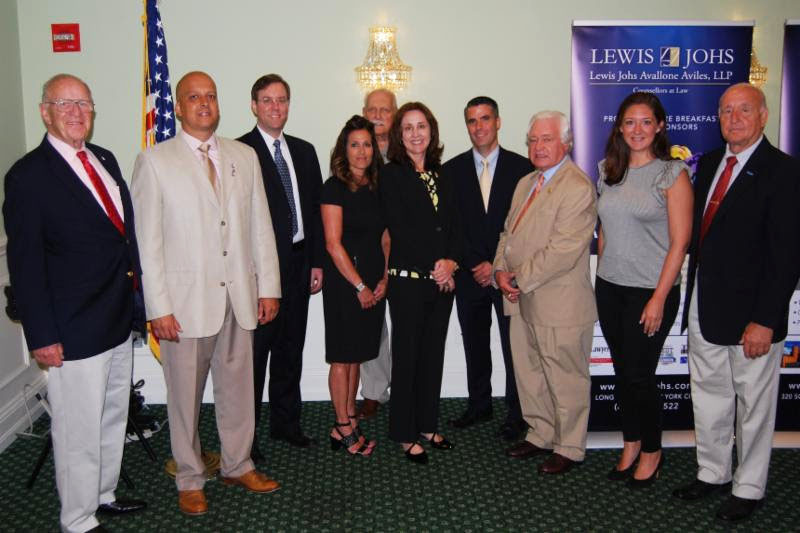 Suffolk County Police Commissioner Geraldine Hart spoke about her career in law enforcement. She spent 21 years with the FBI. She was assigned to the FBI’s Manhattan office, where she worked in the Organized Crime Unit.

Over the past year, violent crime in Suffolk County has gone down 20%, while property-related crime has decreased by 10%. Despite those encouraging statistics, Commissioner Hart said, more needs to be done.

As police commissioner, her top priorities are cracking down on gang-related crime, dealing with the opioid crisis and school safety. In addressing the first priority, Commissioner Hart said the FBI is working with the Long Island Gang Task Force; she is also encouraging the officers to become involved with the community. She said that community relations should be in the DNA of every officer. Most recently, some police precincts took part in the National Night Out as a way for the officers to interact with the public.

In speaking about the opioid crisis, she said they will prosecute the dealers, while those who are addicted to these painkillers can receive help. The police department is partnering with LICADD (Long Island Council on Alcoholism and Drug Dependence), which, in turn, will reach out those who need help. This program, she said, will provide treatment for addicts instead of sending them to jail.

The third priority – school safety – was widely discussed. Those in attendance asked how the police can make schools safer. Commissioner Hart said the schools and the SCPD are working together as part of the SHARE program. She said all transmissions from the schools’ cameras go directly to a centralized location where SCPD personnel can monitor it. From their location, they can get control access to the schools remotely in the event of an active shooter; they can also assess the building to make sure the school is not a soft target.

Commissioner Hart said her agency is staying on top of potential attacks on schools by viewing real-time video, responding to social media posts, establishing a robust intelligence center that is vetting all threats and making sure everyone communicates with one another. She pointed out that, nine times out of 10, an active shooter makes their intentions known before committing the act, so she urged everyone that, if they see or know of a threat against the school, to contact the police immediately.

One of the audience’s concerns was the overtime pay collected by the officers. The commissioner addressed the problem by stating that overtime costs are down by $5 million compared to last year and more officers will join the force after completing academy training. Further, many of the police academy graduates have a four-year college degree or higher.