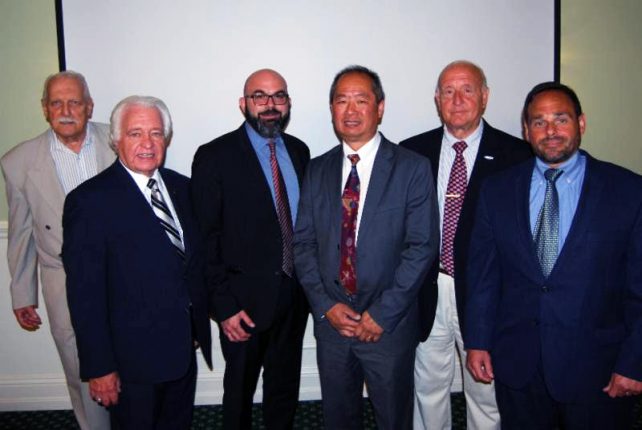 Since accepting the role as president of the LIRR in April 2018, Phillip Eng has looked for ways to improve service for the 300,000-plus riders that use the trains every day. For example, he described the proposed addition of a second track that would improve service between Ronkonkoma and Farmingdale. In addition to alleviating stress on the existing first track, the second t rack would be built without the need to acquire additional property, provide more choices for commuters and more reliable service.

LIRR Forward is the initiative Mr. Eng is bringing to the LIRR. He asked, “What do our customers deserve?” to which he replied “A seamless, safe, comfortable ride.” He said the LIRR is adapting a “fix it now” attitude, taking a proactive (rather than a reactive) approach. In addition, he wants to accelerate best practices and find new practices to make the LIRR more cost-efficient. This includes identifying and attacking the causes of delays and making improvements in relaying real-time information to riders so they can make better commuting decisions.

In 2017, there were 205 switch failures; 10 of those switches caused 44% of all failures. To fix that, Mr. Eng said, those switches will be upgraded within six months. Also last year, 417 trains were delayed as the result of vehicles on the tracks. The problem was addressed by installing high-visibility delineators all of the 29 grade crossings this year. The LIRR also worked with the company that made the Waze app to prevent motorists who use the app from accidentally coming onto the tracks.

Last year, Mr. Eng said, over 2,600 trains were delayed due to extreme weather conditions. To remedy the situation, the agency has cleared 180 miles of overgrown vegetation to reduce the number of track incidents and installed 60 snow switch covers – a project that was completed two years ahead of schedule – and added 14 third-rail heaters. He is also working with PSEG to replace 80 utility poles along with the right-of-ways; as of this writing, 51 have been replaced so far. He is also looking to have the door components that have failed during winter months; these repairs will reduce delays and liability.

He concluded by emphasizing the importance of providing access to the state’s airports via trains, citing the AirTrain that is connected to JFK Airport. He said he is looking to improve access to other airports such as LaGuardia and MacArthur.

Mr. Eng said the programs that are put in place can work, but they cannot be successful unless his customers – the commuters – are satisfied.