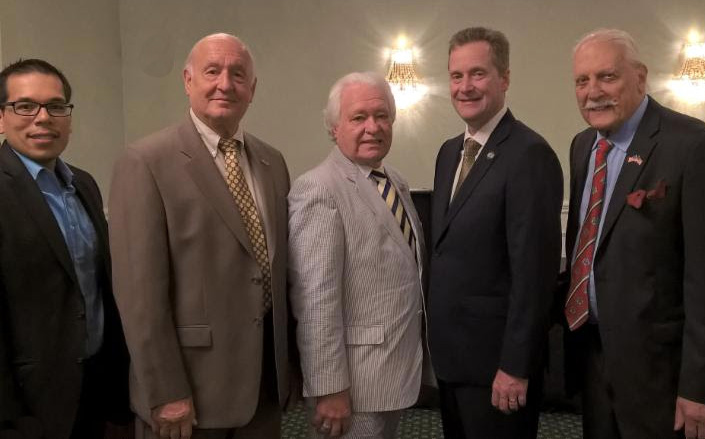 Sean Walter is the Supervisor of the Town of Riverhead. He was our speaker this morning and he brought the audience up to speed on what has been known as the Enterprise Calverton project often referred to as EpCal. The history of the property goes back to when the Grumman Corporation used the facility to build and test airplanes for the Navy when Long Island was a major producer of fighter planes. Former Congressman George Hochbrueckner was instrumental in getting the property into the hands of the Town of Riverhead. (George was in the room this morning).

The town has been dancing with various partners in trying to get something productive going there. The idea of using it as another passenger airline airport was almost immediately rejected. The use as an air freight landing field did not have much of a reception either. The idea as a business enterprise zone has had some legs but some of the proposed partners were not on the same page as the town.

Selling the parcel to a developer has had some problems. The cost to a developer would be $45 million but the needed infrastructure to make the area viable would cost another $55 million. Along came Daniel Preston with his Luminati. Mr. Walter referred to him as a Doogie Houser kind of guy and with him as a financial backer John Catsimatidis. The plan is to develop the newest technology in aviation materials and solar flight.

Preston offered $45 million for the property which has a buildable potential of 10 Million square feet. And the potential of 10,000 employees. That according to Mr. Walter which would require additional lanes of highway and that could be a big negative. EpCal will also need a “village” of rental apartments. Given the hurdles to overcome the Supervisor still gave us a sense that there is something big that can be accomplished.