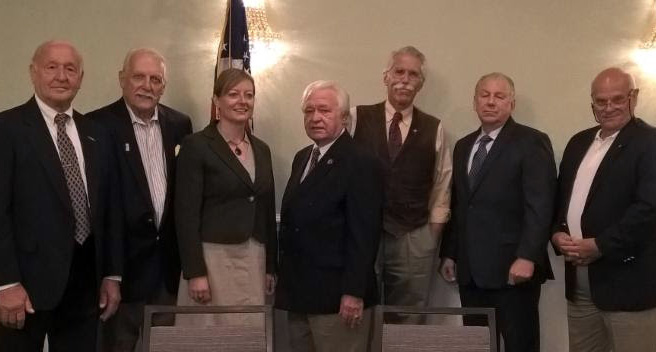 Three of Long Island’s environmental experts discussed our water quality. The panel helped the audience understand the complexity and concerns about the quality of our water. We not only addressed drinking water but the quality of the water in our bays and estuaries.

Dr. John Tanacredi is a marine biologist and has been paying a great deal of attention to the bays and estuaries on Long Island. He provided us with detailed maps of water bodies on and around the island showing by color charts the area of concern.

John stated that in and around New York City $10 billion dollars has been invested in cleaning up the rivers and that area has seen the cleanest water it has had in many years. He explained that not all of the fish kills, algae blooms, and brown tides are a result of manmade causes. Some of this action is part of natural cycles. Nevertheless he is in favor of mitigation of the source of nitrogen pollution curtailing them because it is aggravating a serious problem.

Carrie Meek Gallagher is the Regional Director New York State Department of Environmental Conservation. Carrie concentrated on the complex causes of ground water deterioration. Starting with the defense related industries that discharged solvents and other wastes into the ground over a number of years. These discharges created plumes of contamination that were not effecting ground water quality at first but as they migrated into pristine water areas underground they caused some wells to be abandoned.

In 2002 LIMBA learned from Suffolk County Water Authority, that they could measure contaminates in water in terms of parts per million. Today they can detect contaminated in parts/trillion. Is the quality of the water getting worse, or are we just better at finding the contaminants? That answer is uncertain, but we do know that pollution plumes are spreading out from their original sites.

According to Gallagher heavy use of water removes the pristine water from the aquifer and creates an imbalance underground that allows the plumes to migrate. In other words even though there is ample water, there is good reasons to useless.

Dorian Dale is the Chief Sustainability officer for Suffolk County. Mr. Dale has been active in determining whether the new septic system that Suffolk County is promoting and subsidizing is going to be attractive enough for people to buy and install. The system has a gross cost of about $18,000, but with subsidies could be under $5000 which is not substantially more than a conventional cesspool.

Dorian pointed out that the cost of water is only $1.82 per thousand gallons under our municipal system, while water in Nassau County is $4.82/1000 gallons through a privately held water company.

Our sponsor was RB Bender Group and his technology became part of the discussion when he said his technology could provide a home sanitary system that would be about $3500 with no subsidies. That statement got the attention of Mr. Dale.