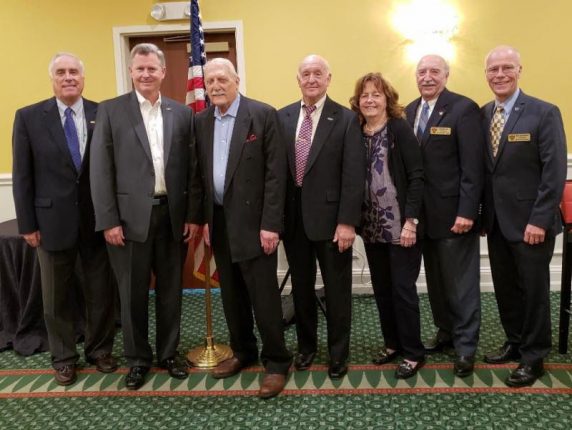 At Friday’s program Michael Canders and Alan G. Vitter gave us interesting insights into the military careers of two outstanding leaders. To be sure the experiences of each of them were different.

“Don’t Thank Me For My Service” was the theme of the meeting and they settled on that title for their presentation as a result of an article of that name appeared in the NYT written by Matt Richtel.

According to these now retired senior officers the phrase comes off as trite, and shallow. Perhaps we should be asking questions about the state of their being.

Colonel Vitters experience goes back to Vietnam. As a platoon Leader in the 82nd Airborne Division he saw the nitty gritty of war and experienced the terror of the moment as much as the enlisted personnel that he led. Vitters is the recipient of Legion of Merit, Bronze Star and Combat Infantry Badge.

When he returned to the U.S. he was selected to participate in the prestigious “Honor Guard” and had a significant role in the state funerals of Truman, Johnson and Hoover.

He knew he wanted to be an educator and eventually earned his PhD in management. As an assistant professor at St Joseph’s College he has an emphasis in helping veterans.

Colonel Canders had wartime experience in Iraq. Canders however never saw the close-up battles that have deeply affected others. Canders said that there was always the possibility of IED’s but that was a random chance.

Mike spoke about the sacrifice of the families. According to him he always felt that he was doing exactly what he wanted to do. The families were often in the dark and concerned about the safety of those family members in the military.Colonel Canders is now working as the Director of Aviation Studies at Farmingdale College.

There were in the audience that had some affiliation with veterans and some of them were veterans themselves, so there were many questions and comments.

Col. Vitters introduced the idea of reinstating the draft. Since there is no longer a draft we lose the opportunity to meet people from around the country. That may be contributing our differences. Both agreed that the burden military is borne by too few.

A question was asked about the effect of war on enlisted personnel vs officer. Colonel Vitters suggested that the effects of battle are more profoundly felt by the enlisted soldier that the officer, because the officers are schooled in the whole scope of the risks and resposibilyies of the field, whereas the enlisted soldier is only physical trained to perform and use his weapons

Rosemarie Kluepfel was there and she announced the giving away a house to a qualified veteran by Fairway.