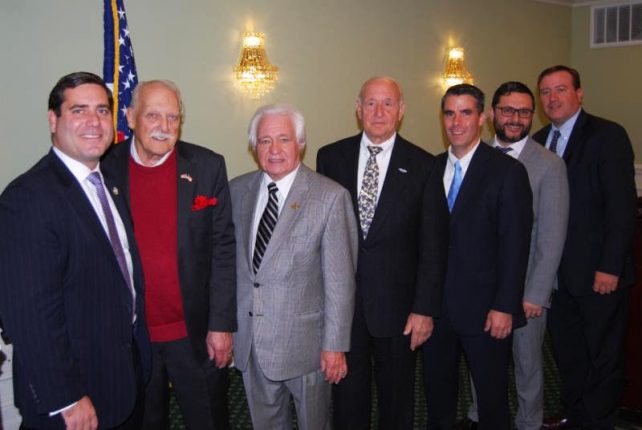 Tim Sini spoke about what he has accomplished and what he is continuing to do as Suffolk County District Attorney. He was elected in November 2017 and took office the beginning of this year with a focus on internal reform. He said that meant getting rid of bad actors who did not serve the office properly. So far, Mr. Sini has made 220 personnel decisions; this included firings, reassignments, demotions and promotions.

In building up the DA’s office’s talent pool, Mr. Sini has hired experienced prosecutors as well as entry-level hires, whom he sends to training programs to prepare for their new roles.

As DA, he has added new units to the office: the Gang Unit, which seeks to investigate and prosecute gangs, including MS-13, and works with the U.S. Attorney General’s office; the Enhanced Prosecution Unit, in which they collect and disseminate evidence in order to prosecute the impact drivers of crime; and the Environmental Crimes Unit. Mr. Sini said the latter unit needed to be formed because the illegal dumping of solid waste and construction materials has gone unchecked for a very long time in Suffolk.

The purpose of the prosecutor, Mr. Sini said, is not to be an advocate, but to administer justice. When putting a case together, the DA’s office is obligated to share any and all evidence with the defense to determine the defendant’s guilt or innocence. Under the Brady Rule, the prosecution is required to hand over any evidence to the defense that may benefit the defendant. The purpose is to make sure there is less liability to committing violations of discovery and to take away the role of gamesmanship because the goal is to distribute justice, not win the case. When the defendant is free, it is usually not because they are innocent, but because the prosecutor may have withheld evidence that would have benefitted the defense.

The three other areas the DA’s office has focuses on, according to Mr. Sini, are drugs, human trafficking and public integrity. His office is focusing on targeting drug dealers; for nonviolent drug dealers, his office would provide diversion therapy rather than prosecute them. In discussing human trafficking, the victims are either forced into the sex trade or placed into slave labor. He said these trafficking victims are either homeless or suffer from drug addiction and mental illness; those forced into prostitution will receive treatment instead of facing arrest, according to Mr. Sini. Since November 2017, his office has prosecuted 300 cases, compared to zero under the previous DA. Mr. Sini also said he is ridding the county government of corruption, in which taxpayers and business owners pay the price.