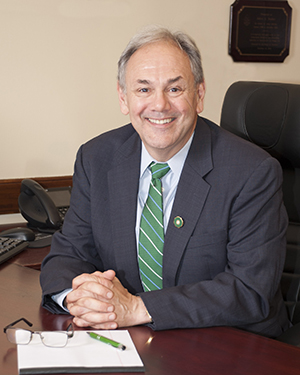 “Farmingdale is indisputably a jewel in the State University of New York system,” Dr. Nader said. “With robust enrollment, highly qualified students, exemplary academic programs with outstanding outcomes, and new construction, we are poised to make even more progress and elevate our importance to the region’s students, businesses, and communities. It is imperative that Long Islanders learn more about our college’s success in preparing students who can help the region thrive.”

Dr. Nader said particular areas of focus will be shepherding the introduction of the College’s first Master’s degree program, enhancing the research enterprise, and ensuring an environment which allows students and faculty to flourish.

He plans a 360 Degree Tour to engage the campus, state and federal legislators, industry and community leaders, donors, and alumni in conversations about making Farmingdale an even greater college.

Farmingdale has the second-largest undergraduate enrollment among four-year institutions on Long Island (behind Stony Brook University) and is among the most selective colleges in the region. It has been nationally ranked in various surveys on campus safety and least student debt, and is a pioneer in green technology, including a model Smart Energy House, a solar-powered carport, and alternative-energy research. In addition, Farmingdale provides solid employment opportunities for graduates who are a force for economic growth.

Dr. Nader had served as Provost at SUNY Delhi since 2009, directly supervising all academic programs, as well as the library and learning center, career and business services, grants and sponsored programs, and partnerships with the community colleges and local high schools. From 2012-2013, he was presider of the SUNY Chief Academic Officers organization.

He also spearheaded the effort to obtaining approval for many new academic programs and was deeply involved in developing a fully online RN to BSN degree at Delhi, which has received national recognition. The success of that program has led to the creation of other online degrees and the introduction of Delhi’s first graduate degree.

Previously, Dr. Nader was the College’s Dean of Liberal Arts and Sciences, overseeing the introduction of new degree programs in Environmental Studies and Criminal Justice. As both provost and dean, Dr. Nader focused on promoting student success through improving advisement, expanding scholarship support, and promoting community engagement and service learning opportunities for students.

He also served as Mayor of the City of Oneonta from 2006-10, where he worked to successfully revitalize a long-dormant downtown property and guided the creation of a veterans’ memorial walkway. He recently chaired the City’s Charter Revision Committee. He also served a dozen years as an Otsego County legislator and as Chair of the Opportunities for Otsego Board, where he worked to establish a homeless shelter.

Dr. Nader is an avid sports fan whose family formerly owned a minor league baseball team affiliated with the New York Yankees and the Detroit Tigers.

He possesses a BA in Politics from Ithaca College and an MA and a PhD in Economics from the New School for Social Research.