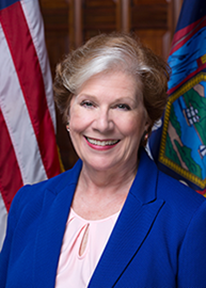 Previously, Commissioner Reardon served as President of the American Federation of Television and Radio Artists (AFTRA) from 2007-2012. She was the founding Co-President of SAG-AFTRA, a 165,000-member union for the entertainment industry, when the Screen Actors Guild (SAG) merged with AFTRA in 2012. After stepping down from that position in late 2013, Commissioner Reardon consulted for the AFL-CIO as Special Liaison for Common Sense Economics. She also taught in the Cornell/CUNY Labor Relations Certificate program.

Commissioner Reardon is a former member of the Board of Trustees for the AFTRA Health and Retirement Fund, as well as the New York City Labor Council. She has been honored with the Jewish Labor Committee’s 2009 Human Rights Award as well as the New York City Central Labor Council’s 2012 Award for Service to the Labor Movement and was a recipient of the Cornell ILR School, Union Leadership Institute’s 2017 Change Maker Award.

Commissioner Reardon graduated from the Cornell Industrial and Labor Relations School’s New York State AFL-CIO/Cornell Union Leadership Institute and holds a Bachelor of Arts from the University of Wyoming. She is a Worker Institute Fellow at Cornell University and sits on the Board of Trustees for the Actors Fund of America.