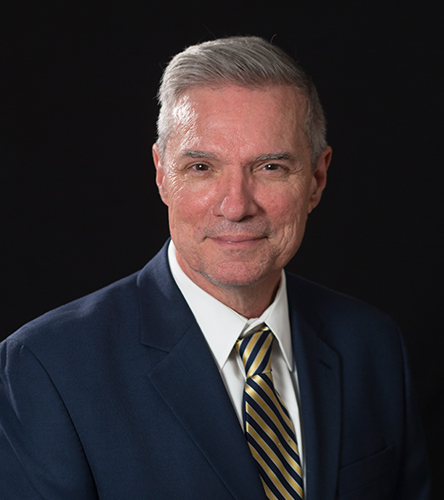 Donald R. Boomgaarden, Ph.D., the eighth president of St. Joseph’s College of New York, most recently served as the provost and senior vice president for academic affairs at the University of Scranton in Scranton, Pennsylvania. Before arriving at Scranton, he was the dean of the College of Music and Fine Arts and David P. Swanzy Distinguished Professor of Music at Loyola University New Orleans, the only college devoted solely to the performing arts in the entire 28-university Jesuit system.

Dr. Boomgaarden is a graduate of the Eastman School of Music and the University of Vienna, where he was a Fulbright Scholar. He also graduated from Harvard University’s Institute for Management and Leadership in Education. His teaching career has included positions at the Eastman School of Music, Ithaca College Conservatory of Music, St. Mary’s College in Maryland, the Institut für Musikwissenschaft at the University of Salzburg, Loyola University Maryland and Loyola University New Orleans. He served as chair of the music department at St. Mary’s College in Maryland, and later as assistant to the provost. At Loyola University Maryland, he was the assistant vice president for academic affairs and was primarily responsible for the creation of new academic programs, assessment and faculty development.

Dr. Boomgaarden has enjoyed a long career as a performing artist. While still in high school, he studied with Blaise Montandon at Del Mar College in Corpus Christi, Texas. At Texas State University, he studied piano and composition with Russell Riepe. Later, at the Eastman School, Dr. Boomgaarden studied with Ellen Martin and Thomas Donohue. He has performed at master classes with Gustav Leonhardt and Paul Badura-Skoda, and continues to perform frequently as a soloist and accompanist in Europe and the United States. Most recently, he performed Johann Sebastian Bach’s complete Goldberg Variations in Baltimore, Maryland; Corpus Christi, Texas; and New Orleans. He also performed a cycle of Chopin’s Mazurkas for Loyola’s Alumni College events. His most recent performances included an all-Chopin recital of Mazurkas, Nocturnes, Preludes and Waltzes, as well as a special concert broadcast on WVIA’s “Simply Grand” artist series.

Dr. Boomgaarden is a noted historian of opera, music aesthetics and harmonic theory. His writings include his book on the interrelationships between philosophy and music, “Musical Thought in Eighteenth-Century Britain and Germany,” and articles in The “New Grove Dictionary” and “The New Grove Dictionary of Opera,” as well as the “British Dictionary of National Biography”. He has published articles and reviews in many scholarly journals, including the Journal of Musicological Research, Journal of Music Theory, Ad Parnassum and the Journal of Education and Learning. Dr. Boomgaarden’s writing has also been published in a number of popular journals and magazines, such as Opera Today and The Chronicle of Higher Education.